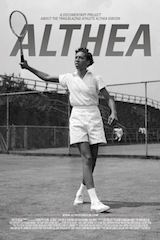 The Gold Coast International Film Festival will be hosting the Long Island Premiere of a new film, Althea, about the trailblazing tennis pioneer Althea Gibson. The screening will take place August 29th at 7:30pm at Soundview Cinemas in Port Washington.

A post-screening discussion will follow featuring acclaimed director, Rex Miller. The premiere is sponsored by the USTA Eastern of Long Island Region.

Althea Gibson was the first African American tennis player to cross the color line. From her roots as a sharecropper’s daughter from South Carolina, to her unlikely ascension within the highly segregated tennis world in the 1950s - in her time, Gibson was recognized as the queen of the sport. She would go on to make history, playing and winning at Wimbledon in 1957 and 1958, and was twice became the U.S. Nationals champion – the precursor of the U.S. Open.

The film reveals the triumphs and trials of an amazing athlete whose life and achievements have entered the annals of African American, and tennis history. Althea reveals rare archival material and compelling interviews with those who knew Gibson personally, such as former New York City Mayor David Dinkins, Jeanne Moutoussamy-Ashe, widow of Arthur Ashe, and Billie Jean King (who also serves as one of the executive producers of the film). 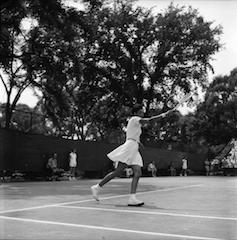 Gibson’s impact on the sport included her brilliant athleticism, and the way in which she navigated through complex issues surrounding race, class, and gender. She paved the way for legends such as King, as well as the phenomenal Venus and Serena Williams.

Fifty years after Gibson’s Wimbledon victory, Venus Williams won the Wimbledon trophy, as well as prize money that was equal to her male counterpart – also a first in Wimbledon’s history. Gibson’s legacy continues live on in this new film that celebrates her past achievements and current influence.

The GCIFF produces a year-round film series featuring an exciting slate of quality films and award-winning talent. This fall, the GCIFF will be celebrating its Fifth Anniversary Festival November 9-15, and recently won first place in The Best of the North Shore competition as the Best Attraction within the region.