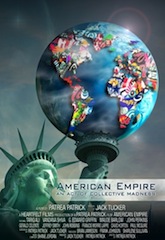 Burbank-based AlphaDogs Post Production has released the documentary American Empire on Amazon instant streaming and DVD. The film is also available on iTunes, Vudu and Xbox.  American Empire sets out to trace a common cause of our problems in finance, food, medicine and social justice.

The movie looks at the Federal Reserve and the American food and pharmaceutical industries, and investigates connections between federal financial policy, corporate lobbying, legislative agricultural policy, the genetically modified food business, copyright law and more. It also interviews a number of educators and activists who are trying to bring greater public awareness to these issues in order to enact positive changes.

When producer Jack Tucker secured distribution for the film, he turned to AlphaDogs to complete the DVD encoding and authoring. “We chose AlphaDogs based on our long personal association and professionalism of the company,” said Tucker.  I’ve worked with the team of artists at AlphaDogs on several different projects over the years and have always been exceptionally pleased with the results.”

“It has to go beyond just the gear and the post-production routine,” said Terence Curren AlphaDogs founder and CEO. “We strive to create a fun experience for our clients by making them part of the creative process. Each of our artists has their own unique style and talent that they bring to the table, which not only keeps our clients coming back, but also puts our artists in demand.”

Tucker and director Patrea Patrick worked with AlphaDogs vice president of design, Sean Williams in creating the DVD menus for American Empire. While on the surface DVD encoding and authoring may look like a routine process without much involved, it can actually help in the branding of the film.

Williams said, “The layout and design of the DVD menu is an important part of the viewer experience.  While a good design may go unnoticed, a poorly designed menu can make a good film look amateurish and less credible. With American Empire, I suggested to the client that we repurpose the original digital artwork from the movie poster when designing the menus.  I created a design that not only made sense for the subject, but also tied into the brand image of the film.”

American Empire, inspired by filmmaker Patrea Patrick, has received unanimous acclaim in pre-release screenings around the world. Filmmaker Oliver Stone called it, “A provocative film.  It makes you think.”  After its premiere at the 2012 Abu Dhabi Film Festival in the United Arab Emirates the Huffington Post called it, “A revolution in film.”  At the 2013 Worldfest Film Festival in Houston where it won the Gold Remi Award Nick Nicholson said, “American Empire is essential viewing.”