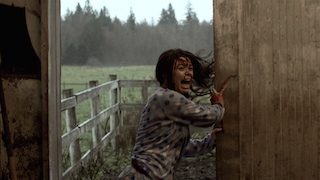 AlphaDogs has completed post on the psychedelic horror film Buzzard Hollow Beef where the phrase “you are what you eat” takes on a whole new meaning. In this suspenseful food horror story, a family experiences vivid hallucinations, leading them to believe that cannibalistic hillbillies have poisoned them.

Inspired by actual events after a trip to North Carolina with their six-month old daughter, filmmakers Joshua M. Johnson and Tara C. Hall got the idea for the story after encountering strange and very suspicious local folks. “There was one particular moment that stuck out when a woman approached us on the street,” said Hall. “She admired our baby and warned us not to let anyone touch her. She was well meaning, but it felt sinister. This got us to thinking about the more mundane terrors in our everyday world, such as, where does our food really come from?  This spawned the idea for the story of Buzzard Hollow Beef.”

Finding a good indie-friendly post house that you can trust is never easy, but the filmmakers felt confident in bringing Buzzard Hollow Beef to AlphaDogs after a trusted colleague assured them that the team at AlphaDogs would give the film the attention it deserved. “AlphaDogs was really attentive to our little project which you don’t see with indie films very often," said Hall. “I was really impressed with the creative solutions the team offered. It’s rare to be treated so well when you don’t have a huge budget to work with.” 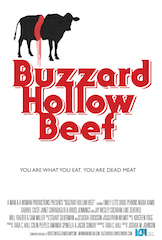 To give the story a more terrifying feel, AlphaDogs colorist Sean Stack worked closely with the filmmakers in creating a very specific look by cooling down the color in the film, thus giving a more sinister and dark tone. Using Blackmagic Design’s DaVinci Resolve, Stack was also able to draw additional detail out of the shadows and pull back on colors where needed.

In addition, problems were corrected with color inconsistencies in footage from different cameras. “Sean not only fixed the problems, he also enhanced the look of the film overall, giving it more of a horror feel,” said Hall. Stack comments, “I enjoyed the project. It had some great challenges and some creative color choices to make. When the scenes come alive and the work is complete with the clients being as happy as I am with the results, it’s always a great feeling. I would be thrilled to work with the talented filmmaking team of Joshua M. Johnson and Tara C. Hall again.”

AlphaDogs audio engineer Curtis Fritsch, cleaned up the dialogue using a combination of Waves, Izotope and Cedar plug ins. Fritsch worked one-on-one with the filmmakers in keeping the SFX gross as they had requested. An entire day was dedicated in the handling of food and getting chewing sounds for some of the key scenes.

“The filmmakers had already laid in some good sound design and I was able to use some of that, which saved time in the budget for more design and Foley work,” said Fritsch. “I used a ton of fruits and vegetable to make some of the more gross sounds, and then used them later to design some of the more gory scenes, just to give more of a personal touch to it.”

Hall and Johnson hope audiences will find the film entertaining.  “We definitely didn’t take ourselves to seriously with this storytelling. We just set out to make a fun horror film that everyone would enjoy,” said Hall.

Buzzard Hollow Beef was recently accepted as a finalist in the 2017 Women in Horror Film Fest. The film will screen at the festival in Atlanta, Georgia September 24.