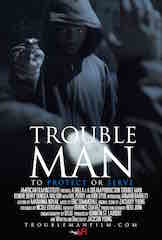 AlphaDogs Post Production has completed work on the AFI Film, Trouble Man, directed by Jackson Young.  The story follows the life of a high school senior who after turning his life around falls into a downward spiral that may prevent him from reaching his dreams of getting into college.

Young chose to work with AlphaDogs once again after successfully completing another project with the team. In charge of post audio for the film was AlphaDogs audio engineer Curtis Fritsch. It was important to Young that the film not only received a quality 5.1 surround sound mix, but also use of directional sounds to add more tension to the story.

Fritsch said, “The film takes place in Texas, and we really wanted the sounds of the environment to match the location. I was able to pull lots of recordings from various locations primarily with use of AlphaDogs extensive audio library, including sounds that were only a few miles from where the film takes place.”  Fritsch was also able to get ADR completed in a timely manner by using audio from alternate takes, rather than bringing the actors in do to redo their dialogue.

“I had a great time working with Curtis,” said Young. “One of my biggest issues was lack of time and I was really pleased at how fast the turnaround was. Curtis genuinely cares about his craft and he gave my film the full attention it deserved. I could not have asked for more with his collaborative style of communication.”

Having already directed a wide range of projects from short films to documentaries, Young chose this time to direct a crime drama that delves into the complicated issues surrounding the morally flawed criminal justice system. “My goal with this film is to spark conversations and challenge the audiences moral judgment in an unbiased manner,” he said. “With so many instances going on in today’s society, everything isn’t black and white. Sometimes doing what’s right is in the shaded gray.”

Young hopes audiences will walk away from Trouble Man with a broader view that encourages them to look at the big picture and seek to understand, rather than judge. “This story needs to be told because there are so many youths — just like myself — that have done things they regret. I’m here to show that although you can’t fix the past, you can shape your future.”

Trouble Man won first place in the DGA Student Film Awards and Best College Short over 10 minutes at the Denton Black Film Festival. The film will screen at the Pan African Film Festival in February.