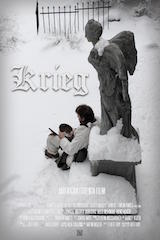 AlphaDogs has completed work on the new WWII short film Krieg. Directed and produced by Jeff Fry, Krieg follows the journey of a Waffen-SS officer who chooses to do the right thing while serving on the wrong side of a world at war. His remorse for inaction in the face of murder compels him to risk all in order to protect a wounded enemy airman.

Krieg is Fry’s first film and he decided to shoot on 35mm film. The inclusion of vintage aircraft, uniforms gives the film an authentic feel, but with more than 50 visual effects shots, it was important to Fry choose a collaborative team that he could trust to help bring his vision to life.

Fry said, “AlphaDogs is my go-to for visual effects, color timing, and preparation of digital files. I can rely on their quality of work, quick scheduling, and best possible price. I trust in their confidentiality, judgment and ability in making the best film possible from my ideas and material captured. I would recommend AlphaDogs to anyone seeking a professional organization for post-production work. They display the utmost professionalism, honesty and integrity in filmmaking”

AlphaDogs’ visual effects artist Russell Frazier composited the two longest visual effects sequences—the Allied bombing of a German town as experienced from an attic bedroom, and scenes inside a bomber surrounding the attack. Fry supplied photos of European villages for accuracy and inspiration from which scenes were fabricated that could be shown from the required angles and tracked to match the camera moves inside the attic. Bomber scenes were shot inside a stationary B-17 with Frazier adding sky scenery outside the bomber and details on the inside that included making machine gun belts appear as though they were loaded and ready for battle. 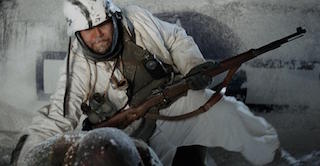 “Working with Jeff Fry on Krieg was particularly rewarding, due to his enthusiasm and conviction to the quality and accuracy of the project,” said Frazier. “His attention to detail and dedication to the integrity of the film were immediately apparent. We were eager to help him achieve what he described and knew that if he met his standards, we had gotten it right for both the movie and its historical accuracy.”

AlphaDogs’ visual effect artist Sean Williams was responsible for a number of shots needing digital enhancements for mood or continuity, including compositing reflected firelight onto binocular lenses, adding shrapnel damage to a soldier’s discarded helmet in a tracking shot and weather touchups to cover continuity issues between different shoot dates for the same scene. “I found working at Jeff’s required level of precision and detail to be a rewarding challenge,” said Williams. “His enthusiasm for historical accuracy and a powerfully cinematic mood inspired me to really push myself and deliver shots worthy of his vision.”

“I was elated with the VFX and deliverables that AlphaDogs prepared for Krieg. Everything met or exceeded my expectations,” said Fry. “Communication was always superb, and any errors encountered, regardless of fault, were dealt with swiftly and to my satisfaction. Moreover, when “upstream” errors unrelated to AlphaDogs were later discovered “downstream” in the final DCP, AlphaDogs worked with me to research and mitigate the issues at little or no additional expense.”

Krieg recently received four awards at the Idyllwild Film Festival including best cinematography featurette, best director featurette, best featurette drama and the audience choice award for the best film. Krieg is scheduled to appear at a number of venues in both Europe and North America throughout 2018.