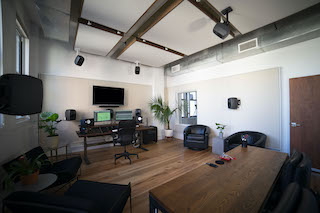 Allison Casey is the owner and senior mixer of Gramercy Post in New York City. She first began working there as an intern in 2008, when she was just 22. While she later switched to freelancing, she continued to keep a close relationship with the company and its founder, Joe Mendelson. Toward the end of 2012, Mendelson decided to retire from sound and sell Gramercy to her. She says that since he’d been able to train her from the ground up and knew they had similarly intense work ethics, she thinks he knew his studio would be in good hands. In the wake of this week’s celebration of International Women’s Day, I spoke with Casey about her career, about how far women and other minority groups have advanced in production and post-production, and how far they have to go to reach full equality in the industry.

Digital Cinema Report: How did you get into post-production?

Allison Casey: I grew up dancing―that was my primary, very intense extracurricular activity. In high school, my dad and I did all the music edits for our routines, which gave me experience working with my first digital audio workstation. I loved being able to combine the creative storytelling of the dance and the songs with the technical side of making a seamless, musically coherent edit. Toward the end of college, after dabbling in academia, I realized audio engineering was a career that could bring together everything I enjoyed. Outside of continuing to edit music and a summer class in Pro Tools, I had zero studio or post-production experience when I started the internship at Gramercy Post, and frankly expected to be a music editor in the film world. Once I got into the studio environment, I really enjoyed it and it suited my personality very well.

DCR: What kind of work do you do?

AC: We do a little bit of everything here at Gramercy. Roughly 60 percent of what we do is long-form unscripted TV, such as HGTV, NatGeo, History and other cable network-type programming. A sizable part of our business also includes film trailers, commercial work, documentary and narrative films, automated dialogue replacement and voiceover recording. I find there’s valuable cross-pollination in understanding the different aesthetics and workflows across mediums; it makes us much stronger engineers and just plain keeps the days interesting. These days I still do a lot of mixing, but much of my job has evolved into coaching my employees and helping them become exceptional engineers and professionals.

DCR:  What has your experience been like as a woman in audio? 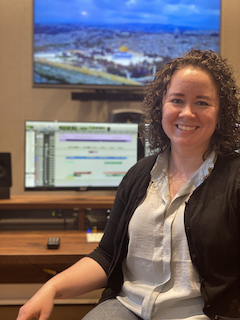 AC:  I own my studio and half of my team are female engineers, so I sometimes forget how few women there are in sound. Then I attend an industry event and am reminded of just how much men dominate the audio and film worlds. And that’s true for all minority groups – there’s so little diversity in our industry.

I do feel I’ve been lucky relative to a lot of other women in the field, especially through my early years. A huge contributor is that I worked at a small company for somebody who was very egalitarian: only the quality of the work mattered. For a long time, it was just Joe, me and one other engineer at Gramercy―so 33 percent of our company was female. That gave me a somewhat insular experience that shielded me from the imbalance of the industry as whole.

It took until a 2016 roundtable event discussing women in audio for me to fully recognize the problems we face. The stories I heard there about women being tracked for management or producer jobs when they had the same experience and goals as their male peers were absolutely shocking to me. It opened my eyes to the issues that were (and are) causing a backlog of women who could be successful engineers but haven’t been as fortunate to have had the same experience as me.

These days, I am really proud that Gramercy is one of the few female-owned studios in the industry. I think it’s important for everyone to see more representation at this level. From clients to up-and-comers to established engineers, the visibility and our success seems to make equality feel more attainable.

DCR:  What do you think could be done to improve the diversity disparity in the audio industry?

AC:  One major thing that I think we need to do is give a chance to a larger collective of people. Network effects are so strong that hiring pools too often mirror the people appointing the positions. I strongly believe it’s the responsibility of those in power to do the work required to expand diversity. This is accomplished not only by spreading the word to a larger and more varied pool of applicants, but also by preventing implicit bias from impacting who we think will be a good fit.

DCR:  Tell us about your workflow – how do you go about sitting down and tackling a project? 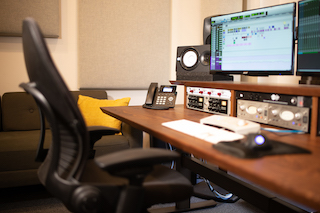 AC:  I could talk about this for hours! First and foremost, we have a lot of precise templates that we’ve made for every network with which we work. We frequently refine those to reflect workflow tweaks, plug-in updates or network spec changes. The templates do a lot to help us work efficiently, get to spec and have the correct deliverables at the end of a project.

At the beginning of any given TV project, I bring the AAF material into the appropriate template and sort through all the content to move it to the proper DX/MX/SFX tracks. I’m a big fan of getting a global view of things before diving into the weeds, so then I start spotting around. I listen to the beginning, then jump around listening to 10- and 30-second chunks of the audio throughout the rest of the piece to get an idea of what the content entails. Is it all narration and music? Is it just verité and interviews? What sort of shape is the dialogue in? What’s the sound design workload like? I also use this time to set my gain structure so that I’m already mostly hitting spec without needing to manually turn up or down every single piece of dialogue and music I come across. Both of those steps save a lot of time as I go through the rest of the process.

From there, I’ll work through the dialogue pass, followed by what we call a music pass but is essentially a first mix pass, then the final mix. Some of our shows require a dedicated sound design pass, while others have lighter needs that can be knocked out alongside the other work. These steps all roughly exist no matter what medium.  Of course, things look different for an unscripted show with a two-day turnaround than they do for an industrial with a two-hour turnaround or a documentary with a two-week turnaround.

At every stage of the mix, I take a step back to consider how the viewer is going to experience the piece. Even though we take many passes at the audio, the consumer is only going to listen to it once, so it’s absolutely vital to keep that experience in mind.

DCR:  You’re a longtime Nugen user, what do you like most about the plug-ins?

AC:  The first Nugen plug-in we purchased was Stereoizer about eight years ago, which we utilize to help push a mono music track into a stereo configuration. It can really save the day when we receive mono music elements as it allows us to meet spec without having to spend a lot of time going back and forth with the editor on a project in tight-turnaround situations.

We later added VisLM, which is far and away the Nugen plug-in that we utilize most often. It appears in all of our templates, from broadcast content to theatrical movie trailers. We also recently started integrating both Halo Upmix and Downmix into any surround work. Upmix gets shockingly great results pushing a stereo track to something that sounds elegant in surround and Downmix has become my favorite tool to retain the quality of the mix when separate passes for different configurations aren’t possible.

Overall, Nugen software is very intuitive, and the fact that it has this exceptional user interface truly helps it stand out from the alternatives. You can do a lot with the plug-ins, but you don't have to spend hours reading on how to use the software in order to get going. The presets are always a good starting place, and then if you want to tweak and modify from there, it’s really easy. As someone who likes to experiment to figure things out more than spending hours reading the manual (though that of course has its place), it’s fun to work with software that makes that possible.

DCR:  Do you have a specific example of a time that Nugen was especially helpful to a project?

AC:  We handle the audio post-production for a weekly late-night show that has this crazy workflow where they shoot in the afternoon and immediately start editing. We mix all of the production dialogue while the rough cut of the show is being put together and later in the evening our dialogue is laid into the fine cut. The next day, after picture lock and just before delivery, we use VisLM and LM-Correct to make any last-minute loudness corrections. The histogram on VisLM is especially helpful in this situation because it makes it easy to see exactly where something gets out of spec. That way, we can rein it in to broadcast standards without having to go through the entire thing in real time.

DCR:  What other types of equipment do you have at Gramercy Post?

AC:  Even though we’re still primarily working remotely, we just finished a beautiful renovation at the end of 2020. As part of the upgrade, we created an Atmos room that is 7.1.4, and we also have one 5.1 room, two smaller stereo rooms and three vocal booths. We upgraded every room to Genelec 8330 and 8340 powered monitors, so our entire studio is Smart Access Memory-enabled. To record narration, we have a bunch of classic Universal Audio 1176 compressors, and Neve 5012 and Avalon V5 mic pres, but that’s as extensive as we go with outboard gear. Then it’s just computers, mice and keyboards. We’re a relatively in-the-box facility.

DCR:  What advice would you give newbies as they get started in the industry?

AC:  This is a tricky industry, without much in the way of clear structure for how to progress within it. If you can develop an autodidactic, self-motivated approach to learning and improving your skills, and following the latest technology and best practices, that’s going to serve you well through your whole career. Put the time into engineering and learning the language of post-production. Being able to communicate well and effectively with your clients is also an easy-to-miss skill, but a giant value-add. Be nice. Beyond that, make sure you’re always advocating for yourself; stay focused on your ultimate goals, but also open to the other opportunities that arise along the way.