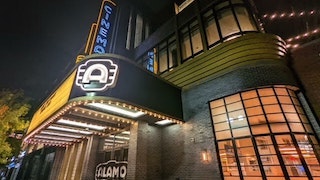 Alamo Drafthouse Crystal City, the chain’s newest location and its fourth in the Washington, DC metro area, opens today, October 24, as the exhibitor continues to roll out sites.

Crystal City, which is close to the historic Washington National Airport, incorporates aviation and aviation-movie design elements throughout the lobby and hallways, including a horde of snakes attacking a plane at the entrance to The Big Show. A blue-and-white second-floor bar, Departures, with an oval bar and round booths, is meant to evoke the feeling of a vintage lounge found within an airport gate.

“An outdoor patio provides views up and down Crystal Drive with the sights and sounds of nearby airplanes departing in the distance,” a company spokesman said. “We're thrilled to announce that after more than five years in the making, it's showtime.”

All food and non-alcoholic drinks will be 25 percent off during the soft opening October 24-2.

The opening lineup includes Black Adam, Ticket to Paradise, and Triangle of Sadness.