Airbag Productions, in Melbourne used Frankie for both interactive and independent reviews during the creation of a commercial for 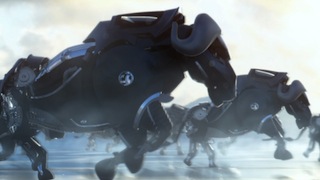 , which features creative CG images of metallic birds, bulls and dolphins that morph into each other and the car.

For independent reviews, Nick Wright, director at Airbag uploaded various versions of these CG assets that differed in color tone to Frankie. He marked them up using Frankie’s annotating and comment tools, then sent the URL to the clients to review in their own time. Given the time difference between Melbourne and the ad agency offices in the UK, Wright could upload images at the end of his workday in Australia so the creatives and producers at McCann in Birmingham could review them overnight. Their feedback was often waiting for Wright when he started his workday the following morning

Airbag chose Frankie to conduct video review sessions both internally and with its local and remote clients after testing and comparing many other options. For its work creating commercials, Airbag found Frankie to be the easiest product to use, with the most appealing interface and PDF summary. Production companies like Airbag now have an affordable and simple-to-use option to complete video reviews.

Airbag Productions is a combined VFX, animation and production company that creates commercials, films and documentaries. It spent several months testing video review packages, using trial versions side-by-side on the same project so it could have an accurate comparison. This allowed the studio to get an idea of how simple each tool would be for its clients to pick up, as well as which features it needed across every project. In the end, Airbag chose Frankie, the video review tool from the maker of cineSync.

“We decided on Frankie because it is by far the easiest product to use and has the most attractive PDF summary,” said Wright. “Frankie outshone the competition in these two areas, both of which are key to our client work. With the addition of their new competitive entry-level plans, Frankie also fits nicely into our budget.”

It was the simplicity of use and the design of the PDF that is saved at the end of each session that really sold Wright on Frankie. “The PDF is lovely. It’s succinct and well designed,” he said. “It was the only one we’d be willing to share with our clients.”

When asked what she was most proud of about the Vauxhall Insignia commercial, Kirsten Michael, post producer at Airbag, pointed to the efficiency of their workflow as well as the clarity of their communication with the producers in Birmingham and the creatives on the Airbag team.

“We completed this marathon sprint in just five weeks,” Michael explained. “Frankie certainly helped with this, eliminating confusion with feedback to speed up the process.”

Michael described how, on the Vauxhall ad and also on a new commercial Airbag is producing for another UK client, they skipped through reviews frame by frame, letting the clients write their comments in Frankie’s notes section while they talked via Skype.

“It was simple for us to tell the client, ‘Point and click here, now you can draw right on the frame,’” Michael said. “I understand that many people struggle with technology, but Frankie is easy to explain to our clients.”

A live, interactive Frankie session can come in handy even with local clients or when the Airbag team is working in the same room.

“We tested many other products but kept coming back to Frankie because it’s the most useful of the tools we tried, especially when there’s distance involved,” said Wright. “But we use it with local clients as well, even if they’re in the same city, to keep things simple. If we’re discussing something and there’s confusion, we send them a URL of the uploaded video, they open it on their screens in Frankie, and we have an interactive review session. We can mark up the video and make comments in real time, then print all these annotations and screen shots off in a PDF. Frankie really is easy to drive.”

Frankie recently introduced two entry-level plans to accompany its Frankie Pro. New users can try Frankie free for 21 days, using the fully featured trial account. This watermarked version can be converted to one of the paid plans during or after the trial. Monthly subscriptions can be cancelled at any time and accounts can be put on hold, with all data saved, for a small monthly fee. For detailed information on the feature set of each plan, or to sign up for a free trial, visit http://www.cospective.com/frankie/.