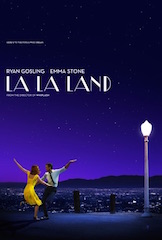 La La Land tells the story of Mia (Stone), an aspiring actress, and Sebastian (Gosling), a dedicated jazz musician, who are struggling to make ends meet in a city known for crushing hopes and breaking hearts. Set in modern-day Los Angeles, this original musical about everyday life explores the joy and pain of pursuing your dreams.

There's no denying that music courses through the veins of director/writer Damien Chazelle. His debut, Guy and Madeline on a Park Bench (2009), was a loving ode to the city of New York, and to being young and in love; his follow-up feature, Whiplash (2014), took audiences by storm with its intense take on a young drummer's self-destructively ambitious pursuit of music-making. Chazelle fully embraces the glamour of the classic Hollywood musical with a modern flair for his new film La La Land, which, like many of the best musicals ever made, is also about Hollywood itself. Ryan Gosling is a principled and penniless jazz pianist whose life intersects with Emma Stone as a would-be starlet washed upon the shores of Tinseltown rejection. As they navigate the highs and lows of the City of Stars (referencing one of the film's catchiest songs), the beats of these two lonely hearts begin to sync as one.

In celebration of the 30th edition of the festival, a trio of diverse female trailblazers are featured in both the festival's 2016 key art and programming lineup. AFI Fest will spotlight Dorothy Dandridge, the first African American nominated for a Best Actress Academy Award; Ida Lupino, a pioneering director, writer, producer and actress who became the first woman to direct a film noir; and Anna May Wong, the first Chinese-American actress to rise to international prominence.

AFI Fest takes place November 10-17 in the heart of Hollywood. Screenings, Galas and other events will be held at the TCL Chinese Theatre, the TCL Chinese 6 Theatres, the Egyptian Theatre and The Hollywood Roosevelt. The full festival lineup and schedule will be unveiled in October.