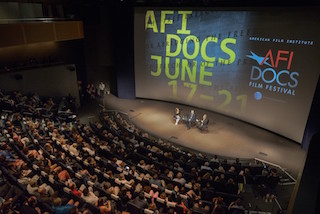 The AFI Docs five-day festival wrapped up this week in the Washington, DC area. This year's Audience Award for Best Feature went to What Happened, Miss Simone? directed by Liz Garbus. This year's Audience Award for Best Short went to A Conversation with My Black Son directed by Blair Foster and Geeta Gandbhir. With 81 films from 25 countries, the festival brought together artists, national policy and opinion leaders along with global representatives.