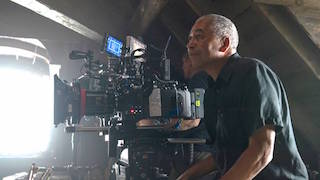 Pre-production began just as the full frame resurgence was beginning and prior to the availability of the S7/i Full Frame Plus lenses and the Alexa LF large format camera system. Still, Adefarasin and Friedkin were keen to take advantage of the format.

So Adefarasin shot some early tests with an Alexa 65 using many different lenses. “Dan is a great collaborator and said from the start that he wanted great visuals but not mannered or false. Although we loved the large format, no lenses [available at the time] did what we hoped for,” he said. “Many of the current ranges are stills lenses adapted for movies, but they did not have any cinematic quality or consistency. Great for plate shots but not kind to faces, and they breathed badly with the slightest focus pull.”

Adefarasin and Friedkin decided instead to shoot with Alexa SXT with Cooke S4/i lenses. Then, just as this had been decided, Arri announced the Alexa LF.

“This camera fulfilled our large format ambition – but, like the Cooke S7/i lenses, it was not yet available and wouldn’t be until our shoot began,” recalled Adefarasin. “It was a massive frustration knowing that the equipment we wanted was just around the corner and out of reach.”

However, thirty minutes past call on the first day in Amsterdam, a brand new Alexa LF and a set of gleaming new Cooke S7/i lenses were delivered to the set.

“We shot open gate 1.85 and the results blew us away,” said Adefarasin. “We were shooting mostly at 800 ISO but at times went to 1280 ISO without any loss in image quality. We could shoot wider shots that had a closer feel, and the viewer could choose what part of the frame they were interested in, giving a more immersive experience.”

The film called for a variety of lighting conditions: on location and on sets, interiors and exteriors, day and night.

“It was always the intention for the lighting to look natural yet interesting. Dan and I never wanted it to look glossy or lit,” said Adefarasin. “We mostly shot with HMI and tungsten but also used a lot of modern LED lights – indeed, some sensitive locations would only allow us to use LEDs – and we used IR ND’s in bright conditions. The Cooke S7/i’s performed superbly at every challenge. We had some shots where we panned through the sun and the results looked wonderful. From candle light through LED to Mole Beams and HMI and then sunlight, I was happy.”

Adefarasin’s early frustration of having to wait for the right equipment for full frame paid off in the end. “We never wanted to shoot big close-ups for this film. Too many movies resort to close-ups when they don’t have a decent background, or to get lots of quick cover. That misses out on the experience of seeing a film. You lose body language, sense of place, relationships. Full frame gives you rich images but with a rounder look… the image rolls off smoothly into the background.

“I’m so pleased with how the Cooke S7/i’s have captured this - practically every frame exalts the virtues of these delicious lenses,” he said.