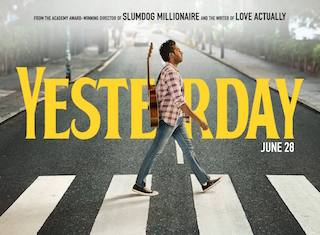 Yesterday, the new British musical comedy directed by Danny Boyle, which was released last month following its debut at the Tribeca Film Festival, used as many as twelve cameras for some scenes. This presented some serious workflow challenges. To address them, cinematographer Christopher Ross BSC, who had previously worked with Boyle on the TV series Trust was joined by Mission digital imaging technician Thomas Patrick who had worked with him for the first time on Trust in 2017.

Mission is a leading UK-based DIT/digital dailies company whose goals include preserving the look of the cinematographer from camera through to post and designing an efficient workflow from production to post, no matter which camera is used. The Red Weapon with an 8K Helium Super 35 sensor was the chosen camera on Yesterday, paired with Panavision PVintage lenses.

Patrick said, “After six months of working with the Red Weapon on Trust, I knew the camera inside and out. Chris Ross loves it and so it was always going to be used for Yesterday.”

The amount of data that would be generated by the multiple Red cameras (up to twelve) on Yesterday might be daunting for a DIT, particularly as it scaled up and down throughout production, but Mission supported Patrick as he planned ahead to ensure that mags were turned around in a timely manner.

Yesterday stars Himesh Patel as Jack Malik, a struggling musician who, after a freak accident during a global blackout, wakes up to find himself in a world where the Beatles never existed and he is the only person who remembers their music. He uses this to his advantage, becoming famous for writing and performing their songs.

Given the musical nature of Yesterday, there are several concert scenes. One of the concerts was filmed on the beach at Gorleston in Norfolk with six thousand extras. Filming also took place at the Latitude Festival in Suffolk. There were also multi-camera shoots at Wembley Stadium and Cardiff’s Principality Stadium during Ed Sheeran’s Divide tour.

Patrick had a challenge on his hands, “They took a tremendous amount of prep and planning” he explained, “of course from a cinematography/camera point of view for Chris, but at my end, I needed to make sure everything was properly synced up and that the data was properly managed. Some cameras were not accessible. Planning the amount of mags required without creating unnecessary bills for production and delegating reloads was a task in itself.”

Patrick had two people running data at the concerts and was on the floor monitoring from a custom-made array of 10 calibrated Flanders Scientific monitors receiving a video feed from the cameras via Cobham wireless remotes. The monitor array was designed and built by Patrick and his colleagues at Mission.

Patrick and the Mission team also worked closely with Ross to design a smooth color pipeline utilizing Red’s IPP2 from camera to post. This began on-set with live grading to create looks. After the mag was backed up, he would use the mag to create a DaVinci Resolve project and iron out inconsistencies between lenses.

“Admittedly the best workflow here is to balance lenses during prep,” said Patrick. “But this becomes troublesome when a movie is shot in the way Danny likes to shoot – quickly and often changing. Chris likes to use non-standard color temperatures, and as such the list of color temperatures for each lens would become close to infinite. It wouldn’t have been practical. Also, using a mix of older lenses often means contrast adjustments are required. So we did it this way.”

The files were then sent to the digital dailies lab at Mission HQ in West London along with a full DaVinci project, meaning that the lab effectively just had to relink to the media and hit render and the looks that Patrick and Ross had created on-set would carry through to the dailies that everyone saw.

Following Yesterday Patrick and the Mission team went on to work with Ross on another Universal picture, Cats, based on the Andrew Lloyd Webber musical and directed by Tom Hooper, which will be released in December.