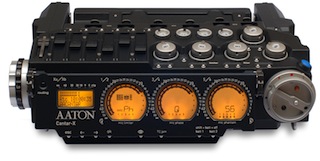 Over the past ten years the Aaton Cantar X2 has been used on a long list of successful feature films including The Hurtlocker, Skyfall, The Legend of Michael Koolhas, which recently won the top French César award for Best Sound, the Oscar-winning movie 12 Years a Slave and the just-released movie Grand Budapest Hotel.

Presented during the MicroSalon in Paris last February, the Cantar X3 echoes the founding principles of the previous Aaton recorder while adding new characteristics that users can expect in 2014.

It combines the ergonomics of the X2 and its microphone preamplifiers and has been redesigned to improve filtering possibilities and reduce the noise level. Other new functionalities include optional Audinate's Dante IP networking. The new features are accessed through an improved human interface with new display based menu control, designed by Transvideo.

External devices can be simultaneously linked to the Cantar X3 through widely used audio and computer connectors adding new capabilities for this machine to be scalable for the next twenty years.

Tim White, production sound mixer said, “As a Cantar X2 user, I have become used to the highest quality audio available in a portable recorder. I look forward to the Cantar X3 building on X2, much expanded in terms of track count, analogue inputs, digital inputs, both AES and IP, in a new futuristic chassis with bespoke controls and rock solid firmware."

Pre-order sales will start after NAB 2014 for delivery this fall.