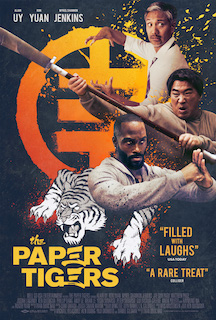 The streaming platform Kinema, in partnership with a coalition of business, entertainment and creative leaders and GoFundMe.org, today announced it will leverage its virtual screening technology to host the first annual Asian American Pacific Islander Storytellers Festival, in celebration of AAPI Heritage Month. The Festival starts tonight at 8:00 p.m. ET with the global virtual premiere on Kinema of The Paper Tigers, an action comedy starring Alain Uy, Ron Yuan, and Mykel Shannon Jenkins ahead of its wide release date of May 7.

The screening, which will feature a discussion with the film’s director Bao Tran and Seattle Times writer Thanh Tan, moderated by Kindred Ventures’ Steve Jang, is one of more than a dozen additional films showings and panel discussions during the month.

The festival is focused on movies made by American filmmakers of Asian and Pacific Islander descent and aims to increase representation of the AAPI community in media and entertainment and showcase the color and diversity of their stories.  Ticket proceeds will go towards supporting GoFundMe.org’s AAPI Community Fund, focused on rectifying the racial inequalities in our society and uplifting, empowering, and protecting the AAPI community.

“Dehumanizing stereotypes of Asian Americans have historically been perpetrated by film and TV, and, as we’ve tragically seen lead to continued racism and violence against the culture,” said Christie Marchese, founder and CEO at Kinema. “At Kinema, we launched our platform with one mission: to foster an interactive cinematic viewing experience and expanded exhibition opportunities for a diverse and growing global audience and we are honored to do that with this festival.”

“Uplifting the AAPI community and supporting organizations dedicated to immediate and longterm action is more important than ever,” said GoFundMe.org executive director, Yoshi Inoue. “We’re honored that the GoFundMe.org AAPI Community Fund is the beneficiary of the AAPI Storytellers Festival as we come together to spread the word about the racial inequalities in our society and create lasting change.”

The AAPI Storytellers Virtual Film Festival will feature films every Monday, Tuesday and Wednesday during the month of May as one-time special viewing events.

“We are living through a crucial time in American history as minorities and people of color,” said Jang, founder of, Kindred Ventures and co-organizer of AAPI Storytellers. “With the media far too often inaccurately depicting Asian Americans in tired tropes and harmful racist stereotypes, we want to create a platform to share the color and humanity of their voices and stories. Our hope is that uplifting these filmmakers and sharing their movies can aid in our efforts to be included in the definition of who is an American.

Expect additional films to be added throughout the month.

Click here for more information about the festival and purchase a ticket to attend https://kinema.com/aapi