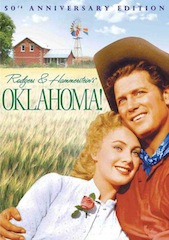 The fully restored and digitally mastered 4K high frame rate version of the hit musical Oklahoma! premiered at the TCM Classic Film Festival on April 10 at the TCL Chinese Theater in Hollywood. This historic screening of the 1955 Todd-AO classic is the first time a high bitrate and HFR DCP has been created and exhibited as part of the restoration of a feature film classic.

“Both Festival goers and industry pros in attendance were stunned and amazed at the sharpness, color saturation and brightness of Oklahoma! at this higher resolution and frame rate,” said Christopher Reyna, co-technical director of the TCM Classic Film Festival. “The higher bitrate made the 4K presentation an amazing treat for the 59-year old Todd-AO restoration, establishing a new benchmark for digital restoration.”

The classic musical was projected onto the large screen by a Christie 4K projector containing the Qube 4K Xi integrated media block and relying on a high bitrate DCP streamed by the Qube XP-I server.

“Qube has already completed 500 Mbps installations for 4K giant screens in museums and science centers,” Reyna explained. “With this Oklahoma! presentation, Qube is helping define advances in both mastering and exhibition technology that will benefit mainstream 4K theatrical exhibition as well.”

For the Oklahoma! premiere, the XP-I server streamed the high bitrate DCP at 500 Mbps and 30 fps to a Xi IMB embedded in a 4K Christie projector. The Qube XP-I server and dual 4K Xi IMBs are currently installed in many giant screen museums across North America, notably the Houston Museum of Natural Sciences and Moody Gardens, where they are used to exhibit 4K 3D presentations.

Oklahoma! was the first Todd-AO feature shot at 65 mm and one of only two shot at 30 fps. It was downconverted to 24 fps for distribution but FotoKem had a negative of the 30 fps version. Nine years ago, FotoKem, noticing that the original negative was badly faded and continuing to fade, made a 65 mm interpositive of the film. For the restoration, it scanned this 65 mm source at 8K to capture as much detail from the film as possible. FotoKem mastered two DCPs: a standard version and a high bitrate DCP that took advantage of the Todd-AO 30 fps film capture.

Mastering at this rate – double that of most DCPs these days – made for much more data in the DCP. This meant that the TCM Classic Film Festival needed a server and IMB capable of handling the amount of data being streamed to the 4K projector, and this is where the Qube XP-I server and 4K Xi IMB came in.

“We went with Qube Cinema because the XP-I server can play back at a much higher bitrate than what other servers can do,” said Chapin Cutler, owner of Boston Light & Sound, the company responsible for technical setup for the entire festival.

FotoKem, which recently bought a Qube XP-I server and Xi IMB for its 4K studio, was able to QC its high bitrate DCP at the studio, before heading to the film festival for a final run-through.

“We did QC on the high bitrate DCP using our Qube XP-I server and Xi 4K IMB embedded in a Christie 4K projector,” said Andrew Oran, vice president sales and operations, restoration at FotoKem. “Then the night before the premiere, the DCP was checked onsite at the theater with the Qube equipment as well. Both checks went flawlessly.”

The opening night premiere of the 4K HFR Oklahoma! was shown on a 66-foot screen. Oran was glad he got to watch the run-through at the TCL Chinese Theater the night before because he spent the first half-hour of the premiere watching the reaction of the crowd.

“The audience was thrilled to see such beautiful images on the screen,” Oran said. “The Qube server and 4K IMB allowed this presentation to be as close to the uncompressed source as possible. We couldn’t be happier with the end result of our high bitrate DCP being streamed by Qube’s server to the projector.”

“It was the best digital film I’ve seen,” agreed Cutler, who was also co-technical director of the TCM Classic Film Festival. “The fact that we filled the 950-seat theater on a Thursday evening to see a movie made in 1955 is quite an accomplishment, and, thanks to Qube, the quality of the exhibition was stunning.”

“It is my hope that, in future years, the TCM Classic Film Festival will be showcasing more of these 4K, 500 Mbps DCPs,” Reyna said. “We’ll be counting on Qube Cinema to help us make this happen.”