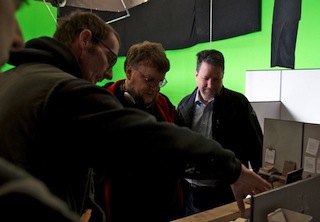 32Ten Studios in San Rafael, California provided a number of practical effects for Pacific Rim, a Warner Bros. and Legendary Entertainment, directed by Guillermo del Toro. The movie was released on July 12 and grossed more than $38 million during its opening weekend.

The primary scene was one in which the interior floor of an office building, filled with fully dressed office cubicles at one-quarter scale, was destroyed by the fist of a Jaeger robot. The fist travelled through the office floor, destroying everything in its path, and was followed by the 3D cameras on a separate pneumatically controlled rig.

Another shot was of several rows of seats in a soccer stadium being blown apart as a Jaeger lands in the stadium. For that, air cannons blew one-quarter scale seats apart. Additionally, 32Ten provided several practical elements for ILM’s compositing team including dust clouds, breaking glass and water effects.

Lindy DeQuattro, co-visual effects supervisor ILM, on Pacific Rim said, "The key to successful effects work is to use the right tool for each job.  We love to use practical effects whenever it makes sense because the inherent serendipity in special effects work gives us a level of realism that can be difficult to achieve in CG. The team at 32Ten Studios built beautiful models for us and then utterly destroyed them. The results were spectacular and the blending of these practical effects with our CG work brought the entire project up to a higher level of realism."