32Ten Studios Blows up a Bridge for The Lone Ranger 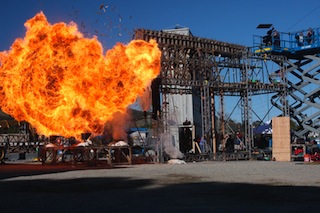 The film’s director Gore Verbinski had previously worked with 32Ten Studio’s practical FX supervisor Geoff Heron on several of Disney’s Pirates of the Caribbean films. The shots were meticulously choreographed in previz by Alex Cannon, directed by Verbinski himself, and handed to 32Ten to be shot using 1/5th scale miniatures.

Three separate sections of the bridge were built at 32Ten Studios by model supervisor Ben Nichols and a team of 22 model makers, with help from one of the movie's production designers Crash McCreery, and Alexander. At 1/5th scale, the largest model was 33 feet long and 25 feet tall.  The three sections were placed outdoors in the backlot at 32Ten, inside a 50-feet by 50-feet water tank, and against an 80-feet by 32-feet green screen. They were shot using high speed Vistavision. Heron and his team used pyro, hydraulics and mechanical rigs to create the destruction required by Verbinski, who was watching closely from LA via a live video feed.

In addition, the 32Ten FX team also spent a week shooting other practical elements and pick up shots with extras, both for ILM and for MPC in London. Both facilities were able to supervise via live feed to London, Los Angeles and San Francisco. 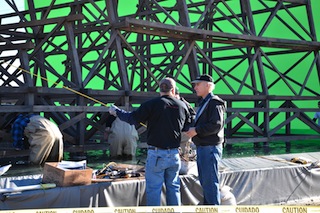 Verbinski said, “I knew, as we set out to design the narrative, that the story of The Lone Ranger was going to be epic. It was therefore critically essential to ground the film in as much reality as possible; I wanted the audience to taste the dust.  So we made it the way westerns were made in their heyday, filming across five states and embracing everything nature threw at us. When it came time to scale the larger than life effects, 32Ten Studios were in stride with that intention. They knew how important it was to get this exactly right: To make things feel raw, dynamic, and gravitationally correct. They painstakingly adapted their approach through craft, passion, and good cinematographic science, until it was absolutely believable. It is almost a lost art, and I am so happy to have a team like 32Ten around who knows all the tricks of the trade and are constantly advancing it to the next level.  They make cheating the eye, honest work.”

Hanson said, "Working with the amazing talent at 32Ten is like coming home for me. Over the years, I've worked with this team on hundreds of miniatures and practical effects. When our big miniatures and key special effects elements came up for The Lone Ranger, I knew we needed absolute perfection matching into our live action film. The 32Ten team was able to deliver in our true Lone Ranger style of large scope and spectacular images, all beautifully executed."

McCreery, who, along with Jess Gonchor, is a production designer on The Lone Ranger, adds, "Working with the artists and technicians at 32Ten reminded me of why I got into this business in the first place. With CG taking over so much of the visual effects needs of films these days, it was fantastic to actually watch a practical model, built by hand, blow up for real, to feel the heat and concussion of the explosion. 32Ten had such a challenge set before them: to replicate an event originally constructed and executed entirely in a computer generated animatic. The rig they built was truly a work of engineering genius. The artists reproduced every detail to the tee. To witness this little piece of film history take place in real life was a rare treat."