Despite the long odds against them, the low budgets, the uncertainty about commercial success, independent filmmakers consistently deliver movies that are compelling and entertaining. The stories are unique and personal, and the acting from new and established actors alike is often better that what you normally see at the cineplex. Yet too few people have the chance to enjoy these films. Here are what I thought were the twelve best independent movies of 2012. 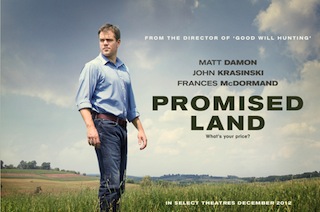 Promised Land.  There is a sense of honesty, integrity, even truthfulness to the movies of Gus Van Sant.  He attracts big stars, but he makes modest-size movies.  His stories are basic, his characters are real.  You leave the theatre feeling you spent time with a craftsman who did a full day’s work for his pay – and you got your money’s worth. This movie was written by Matt Damon and John Krasinski, who also star in the film and bring an easy and genuine naturalness to their roles. The two men prove to be each other’s equal until the plot takes a turn you absolutely won’t see coming.  When the curveball is served up, it makes the game more complex, sets the stakes higher and takes the story to a different level. That’s when Matt Damon steps up to the plate…

Anna Karenina. What this film lacks in soul and substance, it more than makes up for in sweep and style and grandeur.  It’s directed by Joe Wright and if you’ve seen his previous work in ‘Atonement,’ you know he doesn’t do ‘normal’ when ‘extraordinary’ is available.  In some ways, this could be a lavishly-produced episode of ‘The Housewives of St. Petersburg.”  But, if you want to see a historical romance done differently, a Russian novel interpreted for the screen in a way that is visually dazzling, or just a film that takes place somewhere between the live stage and real life – this is all that and more.  If you found Russian literature long and boring back in high school, wait till you see what Joe Wright has in store for you.

The Words.  What the co-authors of this movie (Brian Klugman and Lee Sternthal) and their alter-ego, Clay Hammond (Dennis Quaid) have done here is:  they have blurred the lines between fact and fiction, convincing you that one is the other. They’ve done it so well that you may be asking yourself:  Why is Hammond in here?  Why do we need him?  And then, when you realize the answer to those questions, it will suddenly strike you:  This is just a brilliant piece of screenwriting, a movie that keeps adding layers and takes you to a place where the trailers never hinted it would go. While the story may be a bit esoteric for some, if you think this story could appeal to you, you will not be disappointed. 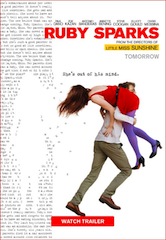 Ruby Sparks.  The plot of this movie reminds me of ‘The Sorcerer’s Apprentice’ segment from Disney’s “Fantasia.”  Both Mickey in “Fantasia” and Dano are trying to contend with the same problem:  their imagination (in Mickey’s case, his magic, in Dano’s case, his writing) has gotten out of control and is causing all sorts of havoc in their lives. Mickey is single-minded:  he wants to get his life back to normal.  Calvin (Dano) is not quite sure what he wants to do; he has created a girl, Ruby (Zoe Kazan), who loves him.  Maybe he should just let his creation be herself – or maybe not.  There really is a thought-provoking idea here – if we could totally control another, what would we do?  This is a warm, feel-good little film that is worth seeing for its core idea and chemistry between Dano and Kazan.  He’s good in just about everything he does.

Take This Waltz.  As Alma in “Brokeback Mountain,” as Cindy in “Blue Valentine,” and now as Margot in “Take This Waltz,” Michelle Williams is a girl lost, a woman in conflict.  When she talks to her husband Lou (Seth Rogen) about the courage it takes for her to seduce him and be rebuffed, when she is walking away after Gerry’s (Sarah Silverman) crisis with tears filling her eyes and her mouth twisted in pain, she is trying to hold up as a woman, while breaking down as a little girl.  This is such a difficult but rewarding movie to watch, filled with nudity that often seems gratuitous, language that seems harsher than necessary, and some scenes that could have been trimmed to make the same point.  But at its heart is this wonderful actress unraveling – and she makes it her emotionally draining experience so very real. With her wonderfully-expressive face, her naiveté, her confusion and vulnerability, we hurt so much for her, we want better for her.  Like the best performances, hers, here, can just break your heart..

Bernie.  There’s lots of good buzz around “Bernie.” Some may be coming from the quirky cast:  Who knew Shirley MacLaine was still alive? When is the last time you saw Jack Black play a real adult? This is based on a 1998 article detailing a crime where a mortician killed a wealthy widow and then tried to convince everyone she was still alive. Whatever the reason, believe the buzz. While this movie can’t decide if it’s a tragedy or a comedy, it’s definitely unlike anything you have seen before. Although it may be too slow for younger audiences, if you like “strange,” you could like this. The “stars” here – and the source of most fun – are all the townspeople who knew the real Bernie – and share what they remember. Director Richard Linklater seamlessly mixes in these plain-speaking non-actors with his professional cast to create a film that feels part documentary, part song and dance melodrama, part real crime – and always a lot of fun.

Jeff, Who Lives At Home.  This family is a walking disaster waiting to happen, a loopy bunch of losers gravitating around Jeff (Jason Siegel), a 30-year-old slacker, still living in his mother’s basement where he does dope, watches TV, and waits for ‘signs.’  There’s not much depth or breadth to the story, but the movie has a sense of casualness, a kind of ‘knotty pine’ look, that gives you the feeling that everyone is really doing the best they can to try to make things turn out for the best.  And Jeff’s message isn’t bad advice: Just maybe life really can be about the basics.  Get the simple things right – and things will never get so complex you can’t handle them.  Say what you mean and say it clearly and simply.  Talk -- and listen -- to each other. In its easy-going way, with its easy-to-relate-to characters, this is worth seeing. 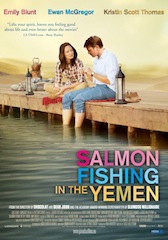 Salmon Fishing in the Yemen.  When you put director Lasse Hallstrom together with Emily Blunt and Ewan McGregor, is it possible to make a kinder, gentler, more charming movie? Actually, maybe not.  And so what we have here is a wonderfully warm and simple little tale that is contrived, predictable -- and altogether enjoyable. The plot:  after another massive British screw-up in the Middle East, the British Prime Minister’s Publicity Officer, Patricia Maxwell (Kristin Scott Thomas) needs a “good news story” from that part of the world.  Enter a wealthy sheik who wants to bring salmon fishing to his native land, an energetic underling (Blunt) who manages his projects and a fishing expert (McGregor) who doesn’t believe their project is possible.  This movie is not without its points of weakness – a violent plot that seems ‘grafted on’, a ‘love triangle’ introduced to complicate lives -- but with those set aside, this is such a charming story.  Like Woody Allen’s “Midnight in Paris,” this movie will leave you refreshed.

Friends With Kids.  This film approaches a common question from an interesting point of view.  The question:  Should we have a child?  The point of view:  It’s posed by an unmarried couple who want the joys of raising a child without the agony of a long-term, committed relationship.  As my late Mother used to say:  “What are they – crazy in the head?”  This is a romantic comedy, so you know where it’s going as soon as it starts down its path.  But it’s also an independent film and so you can expect – and you do receive – several honest truths buried among the pronouncements, mini-speeches, and other expected reactions along the way.  This is worth seeing more for the performances than for the predictable story.  The movie does get a bit rough with the language – including the last scene – but it’s a worthwhile romantic comedy for adults.

Act of Valor.  What strange little movie.  The filmmakers hired real Navy SEALs who used (at times) real ammunition to tell a story based on their real exploits fighting terror on a global basis.  But then, they tried to graft a human story on top of those adventures – and what they ended up with is a film that is a mix of “…apples and rabbits…”  The action sequences just felt so real, they had me biting my nails in anticipation and admiration; and yet, when the action stopped, I was left cringing in my seat, watching amateur actors trying to deliver lines of dialog in ways that sound convincing.  So, this is a film where, if you can overlook the amateurish acting and some of the repetitive action – everything starts out so carefully-plotted and ends in such a massive firefight – this is also a movie unlike any you’ve seen before.  It will absolutely feel real and you will be impressed with these men whose story is being told on screen.

A Separation.  This is an Iranian film, in Persian, with sub-titles.  It’s a small film, narrow in its scope, very limited in its locations and number of characters, but engaging and informative in its message.  It includes religious practices and beliefs in that part of the world and pays homage to family values, without becoming overpowering in either area.  A bit like the movie ‘Carnage’, this is a film with lots of time spent with four people arguing with each other.  Here, the situation is more serious – a murder rather than a schoolyard quarrel – and the actors are not nearly as well known – but the whole situation is more thought-provoking, more real, more involving.  We care about these people, understand the pressure they are under, realize their good intentions, don’t quite know what we’d do if we were in their shoes.  And so, while the last scene may not be a typical ending for a typical Hollywood movie, it feels right for this movie, for these characters, for this situation.  If you like independent films, you’ll like this one.